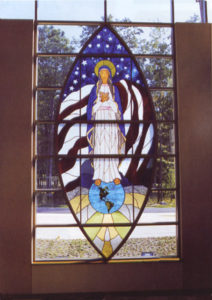 The title of Our Lady of Victories dates back to a historic battle between Christian and Moslem forces at Lepanto in 1521. The Moslems had invaded much of Spain and were threatening to overrun most of Europe and de-Christianize Europe. The threat was real and it all came together at a sea battle at Lepanto. Realizing the importance of this moment the Pope, Pius V, called upon all Christians to pray the Rosary for the success of this battle. The Christian forces prevailed, Europe was saved for the Christian Faith and the Moslems were pushed back to Africa. In honor of the victory, the Pope declared Mary the Lady of Victory and declared her feast day to be held on October 7, the Feast of the Holy Rosary. Our Lady’s powerful intercession has always been a belief of the Catholic Church. Next to Christ her Son, she pleads our cause with a mother’s heart and concern with whatever we bring her. Confident that Our Lady’s prayers are always heard we pray:

O Victorious Lady, Thou who has ever such powerful influence with They Divine Son, in conquering the hardest of hearts, intercede for those for whom we pray, that their hearts being softened by the rays of Divine Grace, they may return to the unity of the true Faith, through Christ, our Lord. Amen.

To commemorate the victory of the Christian Armada over the Turks on October 7, 1571 Pope Pius V introduced in 1572 the “festem BMV de victoria” (Feast of the Blessed Virgin Mother of Victory). In 1573 his successor, Pope Gregory XIII, changed this title to “Feast of the Holy Rosary” to be celebrated on the first Sunday of October. The privilege to celebrate this feast was granted to all those churches which had a Rosary altar. Clemens XI extended it to the whole Church. Under Pius X the feast was again scheduled for October 7; it changed name in 1960 and became “Feast of the Blessed Virgin Mary of the Rosary.” This appellation was changed again in 1969 to Our Lady of the Rosary” and it is now a mandatory memorial. The reference to victory or Our Lady of Victory was maintained in titles and for sanctuaries the world over, in particular in Spain, Italy, France and Germany. The title frequently commemorates, even before Lepanto, the victory over heresy and paganism. Already Gregory Pisides (ca 600-650) sees in Mary the only and unique victor over nature (miraculous birth of Christ and unarmed victory over the Avares in 626. One of the most famous sanctuaries dedicated to Our Lady of Victories is in Paris (Notre Dame des Victories,2eme arrondissement). The sanctuary is intimately connected with the Miraculous Medal and the Arch confraternity devoted to the Immaculate Heart of Mary. This devotion had its origin at the church of Notre Dames des Victories in Paris and expanded during the latter half of the last century over much of the Catholic world.